Now that you have read An Agenda for Life with Org Mode, you know how to build the perfect agenda for managing the tasks in your life. But, I ask you, what good is a task that you cannot complete?

Fortunately, Org Mode provides a rich set of interactive commands for manipulating your task entries directly from the agenda view and, in fine Emacs style, the commands relevant to each type of view will apply only to the appropriate section of a composite view.

I’ve tweaked and customized my interface to the agenda and so I want to share with you the most useful commands and a couple of the things I have added.

I’ve been promising the Twitterverse that I would write more about how I use Org Mode to get stuff done and how I use it to be a better manager. Upon careful reflection, there is too much to cover in just one post, so this is the first of what will likely be several posts on these topics.

Today I would like to focus on the “agenda view” and how I’ve configured it to give me a window into what I need to do now, what is on the horizon, and manage which things I should do first.

This is what we’ll build: 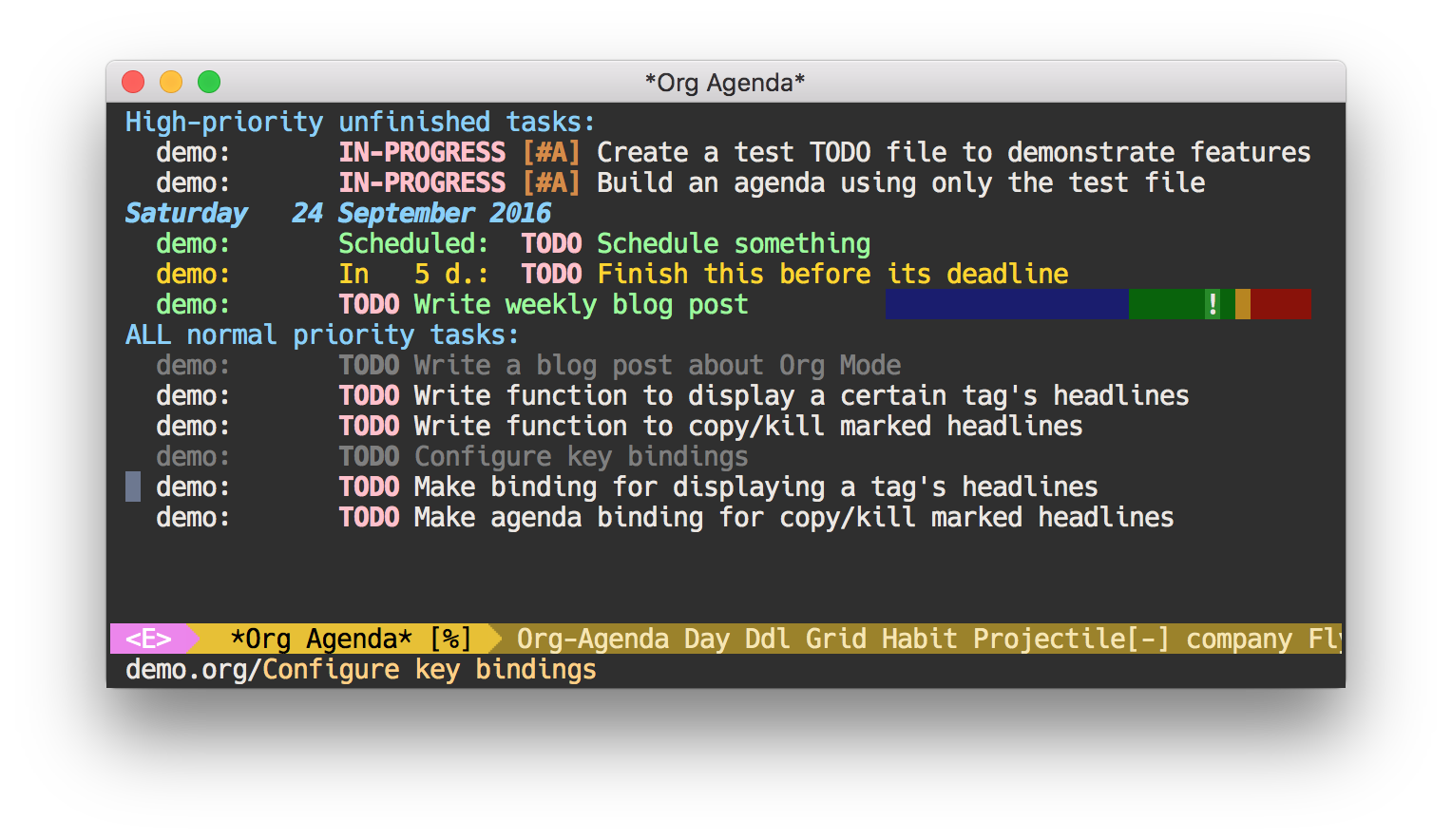 As you certainly know by now, I was an outspoken and enthusiastic Vim user for about 15 years. During that time, I tried Emacs a couple of times, but it didn’t really stick until last year. One of the reasons Emacs makes me so happy is its Lisp-based extension language (Emacs Lisp, or just Elisp for short).

I do not have a formal background in computer science, so I never had the experience of being forced to do exercises in Scheme or Lisp; Elisp is the first (and only) Lisp I’ve ever learned. For that reason, I’m sure I went about it all wrong, but I think I know it pretty well now and I want to share with you some of the tricks and concepts I’ve learned so you can hopefully have an easier time than I did.

Introductory Lisp articles abound, so I will try to focus on the Emacs features and functions that make Elisp development unique.

I’m an opinionated software engineer. I have strongly held beliefs about what makes a program good or bad (as I imagine most programmers do) but as a Vim user for 15 years who changed camps to Emacs, I’m on the front lines of a turf war that shows no signs of calming.

I believe strongly that “good software” is that which is fit for its intended purpose, and that has both benevolent maintainership and a strong community. Because there is nuance of interpretation in these words, I decided to write more.

In my previous post, Playing Tag in Org Mode, I talked about leveraging Org Mode’s powerful tag system to help you find the notes or references you’re looking for.

Since then, I’ve refined my use of tags and begun making better use of Org Mode’s custom ID abilities. In this post, I’ll share the new navigation code I’ve written and show you how you can use custom IDs to link or jump directly to a specific item in your notes.

Also, as a special treat, I will debut my latest Emacs package, Tiny Menu (available right now on MELPA).