I want to tell you about the “ultimate noise (masking) machine,” myNoise. myNoise is a website and mobile app that allows you to explore customizable soundscapes that can help you get in the zone, change your emotional state, manage tinnitus, and more.

In this post, I’ll explain what myNoise is, how it works, make some recommendations for sound environments to try, and share a couple of tips and tricks I’ve developed.

I have donated to myNoise and I use it often, but this post isn’t in any way sponsored. They don’t even know that I’m writing it.

Chances are good that if you’re one of my readers, you work on a computer all day. Maybe you’re a programmer or maybe you’re an engineering manager, but either way you spend a lot of your time getting into (or trying to get into) a “flow state.”

In positive psychology, a flow state, also known colloquially as being in the zone, is the mental state in which a person performing some activity is fully immersed in a feeling of energized focus, full involvement, and enjoyment in the process of the activity.

Many people have trouble getting into a flow state with creative or problem solving work (like writing or programming) without the right auditory conditions. The majority of people solve that problem with music.

The solution to all of these problems is to not listen to music, and sometimes the sound of your environment is good enough. But other times (and I’d venture to say, most times) you can accelerate the onset of a flow state by setting up a specific sound environment, and that’s what I’m going to show you how to do with a website called myNoise.

Perhaps oddly named, and certainly quirky in many ways, myNoise is a website where you can browse hundreds of sound “generators” that each create a customizable auditory atmosphere.

What makes myNoise valuable is the quality and breadth of sound environments available—everything from natural sounds like waterfalls or tropical rainforests, to fictional environments like “medieval library” or “port town”—but what makes it remarkable is its customization capabilities.

Depending on your task at hand and your state of mind, you might like to enter, through sound, a busy cafe, with the indistinct chatter of patrons and the clinking of dishware; or, perhaps you’d prefer an imaginary alchemist’s lab, with its bubbling experiments, hissing bellows, the soft writing on a chalkboard, and the subtle ticking of an old mechanical clock.

At other times, perhaps a walk in a pasture, or a Japanese garden, or through a deep forest may strike the right mood for you.

Each of these sound environments can be adjusted to your taste. Love the alchemist’s lab but find yourself too distracted by the hissing bellows? You can turn down the volume of just that one element, shaping the soundscape to your precise specifications.

I’m going to take you on a brief tour of myNoise customization and then share some combinations that I enjoy, for your approval.

The real power of myNoise comes from its interactive features. There are two massive features that you need to know about to get the most out of myNoise.

As I mentioned previously, each “generator” comprises ten independent audio channels, and you can adjust the volume of each channel as you wish. 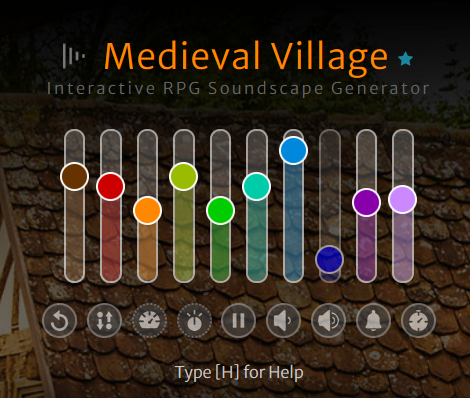 Above is a picture of the controls for a generator (one of my personal favorites). Each of the ten colorful sliders controls the volume of one of the separate audio loops that makes up this environment. To give you some idea of what this is like, the “Medieval Village,” generator has the following sliders:

The sliders represent a rough range from low-frequency on the left side to high-frequency on the right. For example, “watermill” is a deep rush of water, while “fanfare” sounds like hurdy gurdy music in a higher register.

The simplest customization is to simply drag the sliders up and down until you get to a pleasing combination of sounds for the situation and mood that you’re in.

Where things get really wild is when you introduce animation. Animation is a toggle that causes the sliders to move on their own in predefined ways. There are eight animation modes to choose from. The net effect of using animation is that the environment slowly takes on different textures over time, gradually fading each of the loops in and out.

All of the animation modes move the sliders randomly. Each mode basically configures which sliders will move and how far they’ll move in either direction.

The default animation mode allows the sliders to move down to 50% of their initial value, and up to 125% of it. In most animation modes, sliders set to zero will stay there, so you can permanently mute any sound that is particularly off-putting to you.

Unlike the “Extreme” mode, in Minimax sliders set to zero will stay there, so if you just can’t deal with those fire bells anymore, you can mute that channel and let the others continue to change over time.

Oh but there is so much more! You can also create your own combinations of sounds to assemble an environment precisely to your needs or preferences.

SuperGenerators are only available to subscribers (patrons; paying members) and offer the ability to create a URL that will load multiple generators with your specified presets on one page at once (“Mix”), or cycle through multiple generators one at a time (“Sequence”).

Here is one I created that I call Pirate Ship III, which attempts to invoke the feeling of being on a, well, pirate ship, deep in the ocean with a rowdy crew.

Composite Generators are single ten-channel generators assembled from the channels of other generators. Visit a generator, mute the channels you don’t want, and press “c” on your keyboard to “copy” the playing channels. Do that until you have exactly ten. It will yell at you if you try to exceed exactly ten, so be thoughtful.

Finally, press “shift+c” and you’ll be prompted to enter a name, after which a new window will open to a generator containing your selected channels.

Here is one I created called Rainy Estate, which combines sounds of rain, footsteps and a fireplace, and some indistinct radio sounds to create the atmosphere of an old sitting room in a big, drafty mansion.

As you can see on the myNoise generator index page, there are hundreds of generators. I haven’t listened to them all, but I can make some recommendations.

I know I started this post by contrasting myNoise with music, but sometimes you do want tonality, you just don’t want it to change suddenly or distract you. myNoise has a bunch of tonal or musical generators that fit the bill. These are my favorites:

As I mentioned earlier, I listen to all generators in the “Minimax” animation mode after first setting one slider very low and another very high, resulting in a perpetually and dramatically shifting soundscape.

After doing that a handful of times, of course I tired of doing it manually. Fortunately, myNoise is… How do I put this diplomatically? It’s constructed simply. All of the Javascript lives in the global scope, so you can call any of its functions directly.

That being the case, I created this “bookmarklet” (or whatever you want to call it).

Calling setPreset with those values configures the sliders in a roughly pyramid shape from 10% to 100% volume, and calling setAnimationMode(4) enables animation in the “Minimax” mode.

You should be able to drag this link to your browser’s bookmarks bar: Minimax All

I use myNoise all the time. Many times per week, in most weeks. I hope that this post inspired you to change your sound environment, too.

myNoise is the work of one man, Dr. Ir. Stéphane Pigeon. If you get any value out of the site, drop him a few dollars here. Creating a login identity and donating unlocks some special generators and a few other features and costs as little as $5, so there is no reason not to do it.

If you create any Composite or SuperGenerators, please share them with me!