Have you heard of C * Music Player, also commonly abbreviated as its command name, cmus? If you haven’t, you’re potentially missing out on your new favorite music player (at least, since WinAmp 2.x; ahhh, those were the days).

C * Music Player is for UNIX-like OSes, which essentially means Linux and OS X. You can usually grab it through your package manager of choice (apt in Debian-based Linuxes, Homebrew in OS X).

That’s cmus running in a tmux session in iTerm 2, using the Zenburn color theme that now ships along with it (finally).

You might be thinking, “Ugh, a terminal-based music player? How limiting.” Not so. What if I told you that you could have global keyboard shortcuts and Growl notifications? Well, you can (at least in OS X). I’ll tell you how.

Full disclosure: in order to get global hotkeys working in OS X, you need the Alfred Powerpack, which is not free. Alfred is an amazing launcher utility, faster and more awesome than Quicksilver and Butler. Seriously, you should try it, it’s free. If you like it, you can buy the Powerpack and follow my instructions below to learn how use it to control lots of other things.

The Alfred Powerpack includes “workflows,” a super-powerful visual scripting capability that can probably make a lot of things easier for you in the long run. I recommend supporting these guys, they make good stuff.

That said, if you are in a Linuxy type of environment, there will be some other way to create global keyboard shortcuts (in Xmonad you can plop them right into your ~/.xmonad/xmonad.hs, for which there is massive amounts of documentation), but I’m not going to get into any of that in this article.

Even in OS X there are probably other ways, such as Quicksilver. What you need is the ability to bind a global keyboard shortcut to a terminal script execution, or a command, to put it simply.

cmus, by default, starts listening for remote control commands on a UNIX socket called, appropriately, ~/.cmus/socket. UNIX sockets are awesome, even better than named pipes. So how does this help you to reach cmus nirvana? Through a little included utility predictably named cmus-remote. You can already see where this is going.

What we’re going to do is wire up an Alfred workflow to listen for a key press like Control-Command-X and tell cmus to begin playing, then also print out and grep the current artist and track name, and send that along to Growl so that it displays what it’s doing in the corner of the screen. Perfect.

Here is what the workflow looks like for the “play” command:

Evidently the /bin/bash environment that Alfred executes scripts within does not have any path configured, so I’ve had to put in the full paths to each utility, but that’s not a big deal. Let me break down for you what’s happening here.

Next, echo the output of two sub-shell commands:

Each command first runs cmus-remote -Q, which outputs the current status of cmus, including the currently playing track and so on. I use grep to find the line I’m looking for, which looks like tag artist Artist Name and use the cut command to get just the artist name itself.

With cut -d' ' I am specifying that the field delimiter is a space, and then I’m asking for fields three through to the end (the trailing hyphen means “all following fields”).

I then separate the output of each with a hyphen by using this bash construct:

It’s a very helpful little trick to know. This results in an output like “Artist Name - Track Name”.

Then, I set up the Growl notification step in the workflow to actually include the previous command output in the message, which in Alfred you can achieve by using the special string {query}. 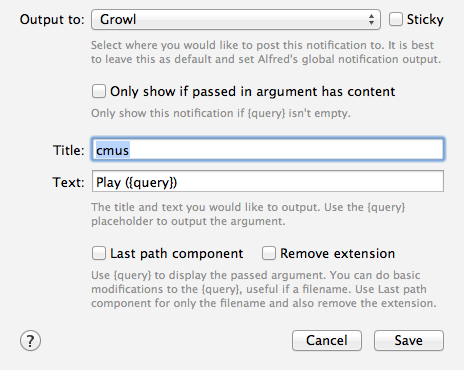 Now when I press Control-Command-X, cmus begins playing and Alfred helpfully pops up a Growl notification saying “Play (Artist - Track)”. I duplicated this workflow for each of previous track, next track, pause, and stop. It’s amazing.

Why go through all of this work when you can just use iTunes or something? There are certainly tons of ways to remote control iTunes with the keyboard, and in fact, Alfred ships with support for it in its workflows, also.

The answer is… cmus is fast. It’s fast and efficient and handles searching, organizing, and playing many thousands of tracks so much better than iTunes. Plus, I can keep it tucked away in tmux where I can get to it by keyboard when I’m in the middle of doing whatever it is I’m doing… Like writing this blog post.

Questions? Comments? That’s what the form at the bottom of the page is for. Go for it.